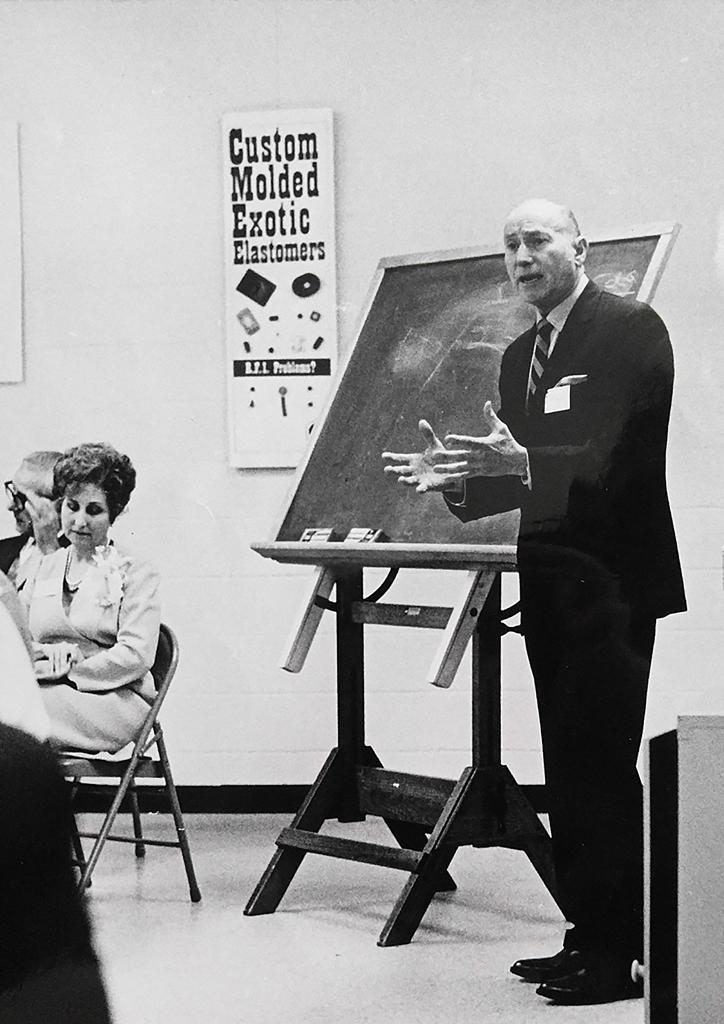 APM HEXSEAL was founded in 1947 by Milton Morse and Riva Solins Morse with a mission to develop and manufacture environmental sealing solutions to protect and prolong the life of electromechanical switches and circuit breakers.

During World War II, the United States Military recognized the need to protect the critical controls for electrical equipment operating in harsh environments. Milton, a self-taught engineer and brilliant innovator, stepped up to the challenge and proceeded to design the original sealing switch “boot” — a molded covering that protected both toggle switch and mounting panel from being infiltrated by liquids and gases of all kinds. Milton’s “boot” was a huge success, which led him to develop and patent a full line of switch, potentiometer and circuit breaker seals that could operate reliably to 100,000+ actuations, under the most extreme, adverse and unpredictable environmental conditions.

Milton and his then young business APM Hexseal went on to assist with the development of the MIL-B-5423 specification (now MIL-DTL-5423) which set the initial standards for the military’s new equipment protection requirements. This military specification was actually written based on APM Hexseal’s proven design and manufacturing processes.

Year after year, APM Hexseal’s boots passed rigorous military inspections and independent QPL equivalents. Today, APM Hexseal has an extensive line of silicone sealing boots that mate with the vast majority of switches, breakers, encoders, potentiometers and other rotary devices used throughout the world, all of which continue to pass rigorous third party testing. Many of these parts now carry UL Recognition.

After the initial success with the military, it was not long before there was demand for APM Hexseal products from the industrial and commercial marketplaces, both within the United States and abroad.

APM Hexseal went on to develop and patent other sealing products, including a complete line of reusable self-sealing fasteners and washers, which were first used to provide additional sealing protection (IP66/68 ingress rating) on our circuit breaker seal mounting flanges. Use of our self-sealing hardware has since expanded to cover an immeasurable number of applications.

Continuing A Tradition of Innovation
APM Hexseal has in excess of 100 patents to its name. Some more recent patents include a “trigger” circuit breaker boot, designed to help actuate more difficult switches and breakers, an IQ toggle switch boot, which provides excellent protection with very minimal installation, and the Ultra Flex full and half-toggle boots, that offer extra flexibility to ensure that the boot will live up to APM Hexseal’s promise of quality protection while removing the risk of unintentionally tripping a sensitive switch.

Extensive Use Worldwide
More than 50 million APM Hexseal boots have been produced, in a wide variety of types and sizes, for military, commercial and industrial applications throughout the world. Installed by more than 200,000 customers, APM Hexseal is the prime supplier for the boating industry, beverage dispensing machinery, combat equipment of all kinds, off-road vehicles, medical equipment, a broad range of instrumentation and communications equipment… the list goes on. Parts have also seen service in every military conflict since the birth of the company.

Have Confidence in Your Decision to Use APM Hexseal Products
APM Hexseal boasts a national and international distribution network, worldwide sales representation, a broad, ever growing product line, 1,049 National Stock Numbers (used by the U.S. government for purchasing), unrivaled technical support availability, and a first-rate machine shop and engineering team for the development of custom products. No matter the challenge, APM Hexseal’s engineers will work with you to create the sealing solution you need.

We are honored to serve as a manufacturer’s rep for APM Hexseal. APM Hexseal has an extensive line of standard silicone sealing boots that mate with the vast majority of switches, breakers, encoders, potentiometers and many other rotating devices found today throughout the world.

How to Select the Right Elastomer for Sealing Boots and Fasteners

Purple Seeloc® Washers 50% Off in November and December

Selecting the Right Elastomer for Your Sealing Boots and Fasteners

we are an eLECTRONICS MANUFACTURERS REPRESENTATIVE SERVING FLORIDA